Before returning to Cambridge for Michaelmas term, we had anticipated that this was going to be a season with many hurdles, but a national lockdown was not one of them. However, as a team we stayed resilient and positive.

Luckily, with support from the University Sports Centre, we were able to run an extremely productive and fun week of Pre-Season training in the final week of September. After such a long break from both Cambridge and lacrosse, it was a joy to be back on the Newnham pitch, even if the group size had to be limited to thirty (sadly now a long distant memory). With a turnout of over fifty players, the week proved to be a great mixture of engaging drills, internal match play and socially distanced socials. As well as the new intake of delightfully keen freshers, we also welcomed the accomplished Julie Wise to the club as our new coach. As an alumna herself, she brought a fresh perspective to the demands of playing lacrosse alongside a Cambridge degree, and proved that age old saying: once a part of CUWLC, always a part of CUWLC.

As the term progressed, with various players going into self-isolation, and the Tiers and tears steadily increasing, we advanced into a hybrid form of training in person and virtually. As it was such a success during Lockdown 1.0, we continued running zoom HIIT workouts for those unable to train with the squad. However, for those lucky enough to remain in the outside world, the joy of Bootcamp was introduced. If the 7.30am start time wasn’t enough to prove our commitment to fitness, then doing sprints on Jesus Green with tyres slung over our shoulders in the freezing rain and mud is surely evidence of our unwavering team spirit.

Both the Blue’s and Kingies’ managed to squeeze in a league match, against Putney and Hitchin respectively, relishing a last opportunity to play together this term. We celebrated our final training session together in full fancy dress, with the fantastic Julie delivering the perfect cocktail of silly games for this last hurrah.

Whilst lockdown may have inhibited large group trainings, the CUWLC activities were far from over, with buddies assigned for partner passing and weekly zoom, strength and conditioning sessions.

Over the Christmas holidays, the team took on our 12 days of Christmas daily challenges in a fight for the top of the leader board. This idea’s success in keeping the team motivated and connected, has led to our deployment of weekly challenges for the coming term ahead.

Whilst CUWLC has unfortunately not been able to demonstrate its prowess on the lacrosse pitch, as a team, we have demonstrated skills arguably more valuable: the ability to adapt, stay motivated and continue to be positive. The CUWLC family has been an amazing support network through what was a very unusual Michaelmas Term, and we are determined to not let an online Lent Term get in our way! 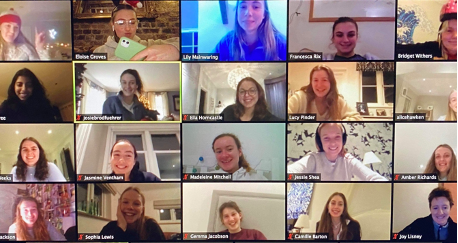 Sponsors:
​
CUWLC are thrilled to announce our two sponsors for the 2021 season: Brown Advisory, an investment management service for individuals, families, charities and institutions, and Advance Lacrosse, led by Wales international and CUWLC alumni Erin Walters-Williams.

From the 23rd to 29th November CUWLC battled it out against the mixed and mens lacrosse teams to see who could cover the most ground, whether that be walking, running, or exercising when in isolation. As three clubs combined, we covered a grand total of 1750km in just seven days!

When Lockdown 2.0 was announced we knew that everyone was missing lacrosse and whilst we couldn’t be out playing, we were keen to keep the lax love going, keep active, and of course maintain a healthy bit of competition! Lucy Pinder, the President of Cambridge Lacrosse, set up a challenge to take place from the 23rdto 29th November to see which Cambridge Lacrosse Club could cover the most distance. Luckily everyone who was in isolation could also get involved, replacing running with squatting, lunging and even star jumps to help their respective club on its way to victory. As three clubs combined, we covered a grand total of 1750km in just seven days and particular congratulations must go to our very own CUWLC member, Hetta Friend, for the strongest individual performance with 75.1km covered in one week!

Over the past three lockdowns, CUWLC has successfully been running a ‘Welfairy’ project where each team member is assigned a player to whom they are responsible for providing anonymous little support packages. It has been a really lovely way to boost team morale even when we cannot be together.

Over the past three lockdowns, CUWLC has been running a welfare project called ‘Welfairy’ which has been a real success. In a Secret Santa style, each member of the team who signed up is assigned another player to whom they are welfairy and are responsible for anonymously providing little packages of support and happiness, often filled with chocolate! It encouraged a lot of creativity too: handmade cards and friendship bracelets, little paintings or drawings! It has been a really lovely way for us to all be reminded that we’re always thinking of each other and missing the team even if we can’t be together.