For their first away matches of the season, Cambridge University Women's Lacrosse Club performed decisively to take home two wins on Wednesday.  With the Blues making the journey to Bristol and the Kingfishers travelling to Reading, both teams returned to Cambridge in stride.

Blues:
The Blues scored a strong victory against Bristol 17-5.  It was a true team win with goals coming from across the squad and a determined defensive effort.  Anna Saunter led the team on offense while Georgia Weeks captained the defence.  Camille Barton notched several goals along with Rebecca Wistreich, Celeste Crosbie, and Alice Hawken, with several others scoring points for CUWLC.  Strong performances from Amber Richards and Jasmine Ventham on the draw coupled with barrier-like defense from Belinda Harrison, Francesca Rix, and George Wood produced a decisive victory.
​
Kingies:
The Kingfishers took on the Reading 1s and muscled to a 23-6 win showing unmatched skill and athleticism with no substitutes.  Captains Bridget Withers and Meera Bahree exhibited flawless leadership to guide their team to a forceful win.  Lacking a trained goalkeeper, Gemma Jacobson and Laurie Price stepped up for half the match each and relentlessly stopped Reading's shots.  Overall, winning Wednesdays are back and here to stay for the Cambridge Women's Lacrosse Club.

Blues:
On the 27th October, the Blues took on Bath 1s securing a strong win of 24-5 on home turf in their third match of the season. With a larger squad providing some fresh legs, Cambridge was determined to go out hard and fast and keep the pressure on Bath throughout the entirety of the match. Despite Bath scoring first, Cambridge secured the ball from the draw and converted a couple of fast goals in the beginning of the first quarter. Bath fought hard for contested loose balls in the midfield providing them with some dangerous attacking opportunities that were denied by solid Cambridge defence and formidable saves from goalie George Wood. Cambridge soon found their rhythm and with some awesome goals from Rebecca Wistreich and fast drives from Lily Mainwaring, along with classy finishes from Anna Saunter, Amy Rochford, Camille Barton and Amber Richards, the score at half time was 16-2 in Cambridge’s favour. The second half was dominated by some excellent defensive performances from Georgia Weeks, Belinda Harrison, Francesca Rix and Emma Bennett, as well as impressive all-round talent and fitness from middies Katie Watson, Jasmine Ventham, Alice Hawken and Celeste Crosbie, contributing to a brilliant Cambridge victory of 24-5. This truly was a whole team performance and one that should leave CUWLC feeling very excited and positive for the rest of the season ahead!

10/11/21: Cambridge Blues defeated by a strong Exeter side
By Phoebe Jackson

Blues:
After a long bus ride the CUWLC Blues put up a strong fight against Exeter, losing 15-8 but importantly getting more than half their score. The game was played on floodlit astro meaning the ball moved rapidly from one end to the other with some strong redefending in the midfield from both teams. In the attack Camille Barton stepped up her play, often being in a 4-on-1 situation but kept calm and powered through, assisted by beautiful C-cuts from Alice Hawken. We had lots of shots on goal but unfortunately struggled to convert thanks to the opposition goalie. There were a couple of yellow cards but our loud and clear communication allowed us to play man down without major issue. Our defence played as a unit, doubling on the ball so they rarely broke through on settled play with the goals coming mostly from fast breaks. All in all, a hard fight against a strong side, but Cambridge took away many positives from their performance, feeling excited for their next meeting with Exeter at home next term.

Blues:
On 26th January, the Blues played Oxford in their first match back of the term. Having played them already this year as our last away game of Michaelmas, and leaving disappointed with the result, the team was especially fired up to shatter Oxford’s complacency and secure a victory on home turf. With light blue supporters huddled on the side-line, the first whistle saw Oxford secure the ball from the draw; it was only after 5 minutes of pitch sprints that they converted the first goal of the game. This was swiftly equalled by an unstoppable drive by Jocelyn Alexandra who buried it in the back of the net. Cambridge’s unit play in attack and defence was some of the best we’ve ever done, with special magic moments by Celeste Crosbie working around the crease and converting every shot she took, and Rebecca Wistreich receiving beautiful feeds from the elbows and ripping them into the back of the net. On the other end of the pitch, Ground Ball Queen Belinda Harrison went for every loose ball and delivered them safely back to our attack and some solid 1v1 defence from Georgia Weeks and Francesca Rix made it especially tough for Oxford to even release a shot on target.

At the end of the first quarter, the score was 3-4, with Oxford one goal ahead. This was effortlessly equalled by Lily Manwairing in the second quarter, who not only had some cracking shots in the attack but also did a number of speedy transitions, sprinting the ball back down the pitch from defence. With the score 5-5 entering the second half, midfielder Jasmine Ventham was on fire winning the ball from the draw and with some excellent connections with Sophie Evett and Amber Richards, Cambridge pushed to secure a 2-goal lead from Oxford. After a flurry of Oxford goals, we entered the final quarter even and a special mention has to go to Phoebe Jackson for some epic saves. One of many goals from lightning attacker Anna Saunter brought us ahead but, with 4 minutes to go, the ball was with Oxford and the score was equal once again. With an absolutely superb interception from co-captain Victoire Gueroult, we regained possession and converted a goal, only for Oxford to call a time out with 2.14s left in the game.

​In the final seconds we conceded a dark blue goal, which meant the final score was a draw: 10-10. But what a match to start the season. Our exceptional performance is especially promising given that our Varsity is in less than a month’s time. Cambridge went out all guns blazing, and we have real fire in our bellies to clinch the win next time. #GDBO

26/01/22: Unbeaten Cambridge Kingies secure another victory to stay top of the league
By George Wood

Kingies:
The 26th of January saw the unbeaten Cambridge Kingfishers take on the Reading 1s in a fight to defend their spot at the top of the league table. The Kingies quickly dominated the match, scoring a series of masterful goals with little challenge from Reading.


The Kingies midfielders demonstrated exceptional draw control, with Emilie Pauwels as Centre alongside Katie Watson, Maddie Mitchell and Erica Shuker. The midfielders were joined by the formidable attacking trio of Bridget Withers, Ella Horncastle and Maddie Cooper to come away at halftime with a score of 11-4.


The momentum continued into the second half, with the defensive unit of Meera Bahree, Lauren Price, Artemiz van den Broucke and Issy Melhuish seeing off the Reading attack at every opportunity. The two attempts at goal by Reading were deftly repelled by goalkeeper George Wood, leading to no goals from Reading in the third quarter against six from the Kingies.


Despite a score-line of 17-4 going into the final quarter, Reading refused to relent, showing continued drive and tenacity. They answered the Kingies’ six goals with an additional two, for a final score of 23-6 at full-time.
The win represents another resounding success in the Kingies’ path to winning the league, with Captains Meera Bahree and Bridget Withers celebrating the cohesion of the defensive and attacking units. In two weeks’ time, the Kingies hope to continue their ongoing success against their next rivals, the UCL 1s.

02/02/22: The Blues secure a strong victory against top-of-the-league Exeter
By Georgia Weeks

On Wednesday 2nd February, the Blues Women’s Lacrosse team faced top-of-the-league Exeter in their final league game of the season. Despite limited squad numbers due to a combination of COVID and injuries, the squad were determined to secure a victory on home turf having previously lost to Exeter in November. Cambridge came out strongly with Camille Barton scoring the first goal of the game, closely followed by some great work around the goal and beautiful feeds, culminating in goals from Alice Hawken and Jasmine Ventham to put us one goal up at the end of the first quarter.


This set us up well for the next quarter, where it was the defensive unit that shone. Featuring some excellent 1v1 defence from Georgia Weeks and Emilie Pauwels, the defence managed to make countless turnovers, with some excellent connections to Sophie Evett and Celeste Crosbie in the attack, allowing us to end the first half 6-3 up.

Exeter came back at the start of the second half with a flurry of goals, however, some excellent draws from Lily Mainwaring and saves by goalie Phoebe Jackson along with the help of the great fitness of Katie Watson, got the ball down into the attack where Anna Saunter and Lily Mainwaring worked beautifully together scoring goals off of speedy drives and free positions. This was followed up by some more cracking shots by Camille Barton, making the final score a win for Cambridge: 10-7.
This was an amazing whole team performance, with everyone playing some beautiful lacrosse, leaving us very excited for the upcoming knockout matches. 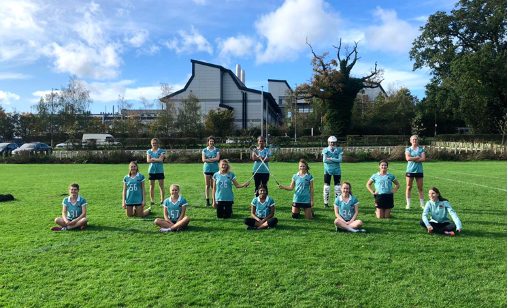